“Clients are impressed by what I can do with KeyCreator, but I don’t think many designers realize how powerful it is. People are so accustomed to all the time and energy that goes into creating a changeable, dimension-driven model with history-based CAD. They don’t know the freedom that you have when you can just pull on a surface and make a change.”

Being an independent designer requires a unique set of skills. The role often extends well beyond the narrow scope of drawings and models, to that of a catalyst in the mercurial process of wrestling an idea into being. Just ask Bob Haskin, owner of Pacific Design Service (PDS), whose work for clients in industries ranging from steel fabrication to high tech spans decades. In that time he’s combined a deep understanding of mechanical engineering with experience designing anything from large printing presses to complex plastic parts, building an arsenal of creative solutions to meet whatever design challenges come his way.

Decades of experience have also taught Bob that independent designers require a unique set of tools, ones that offer the flexibility to keep pace with the back-and-forth between designer and client when bringing a concept from art to part. He may have cut his teeth at the drafting table in the days before the ubiquity of CAD software, but Bob has always kept an eye on the latest design technology. He taught himself CAD in the 2D-only days,  was doing classic 3D wireframe design work before it was cool, and was an early adopter of solid modeling. Bob has used most of the well-known programs professionally over the years, but has always comes back to KeyCreator as his weapon of choice, especially during the early design phase of a project.

For Bob the features that make KeyCreator such a powerful tool for independent designers and set it apart from all other CAD applications are its direct modeling capabilities. Bob likes to be able to approach challenges from any angle, and KeyCreator allows him freedom to do just that.

Bob’s ability to wow clients with rapid design turnaround recently earned him success with an aviation supplier. The client, a supplier of high-end cabin audio and entertainment systems for business aviation, was developing new, modular control switches. After being impressed by Bob’s work on a series of smaller jobs, they contracted with him to design the entire product line.

“With this last set of projects, we created a whole family of components to replace existing controls in the passenger compartment of business class jets, such as Gulfstream. It started as a napkin idea and grew into a complete line of customizable replacement switches to replace broken or obsolete units.”

Designing the series posed several unique challenges. The new controls needed to be fit compatible with the planes’ existing cutouts and be completely customizable for all configurations of cabin controls. “From the start I was very constrained because their goal was to not have to modify the openings in the planes to add these multi-button units," Bob explained. "Initially there were big, sweeping changes as the design evolved or I hit a wall and realized ‘I can’t get all this in here.’ As the product was refined they started making prototype parts and trying it out. It was at that point where you start getting more into the manufacturing engineering side of things where you're tweaking it to make it cheaper to produce.”

Taking this concept from a preliminary sketch and developing it into a product line ready for production required continual design adjustments. The clients were particularly impressed with Bob’s ability to make design changes in real-time during meetings, advancing through the development process at a rate they simply hadn’t experienced before. From Pacific Design Service's home base in Washington, Bob could make concrete design progress while in conversation with client company divisions that were spread out across the country.

“The company’s corporate headquarters is in Massachusetts, engineering is in Florida and Washington, and sales is in Arkansas. We would all be in on Skype meetings and I could change the design in real-time on the fly. I'm developing right there on the spot. We can stay on the same page and quickly move forward.” 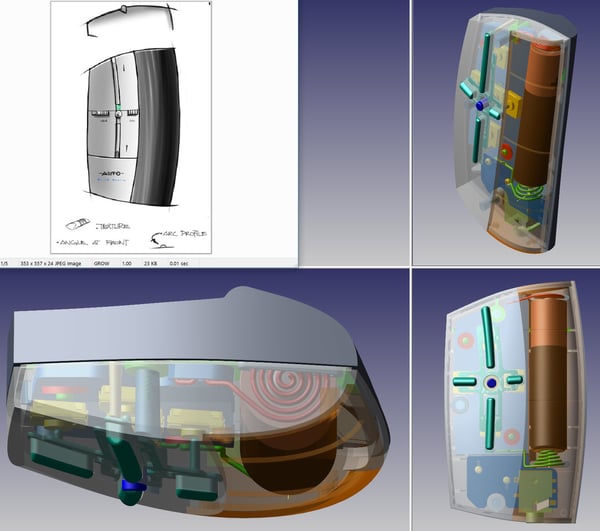 Another project for the same aviation client saw Pacific Design Service designing a clip-on module that adds Bluetooth capabilities to audio headsets. As with the switch set, the device saw extensive changes as Bob balanced technical requirements with ergonomic and aesthetic features, achieving a gestalt functionality that doesn’t merely solve a problem but fits seamlessly into the user’s environment.

“Without KeyCreator, there’s no way I’d be able to create these designs as quickly as I did. The speed of my design is based on the ability to cut and hack on a part, to be able to, for example, extract a hole and change it, extract that geometry out of a solid, put it on its own layer, make changes to the new main body, and bring the parts back together – all in a matter of minutes. I can’t do that type of work on any other system. I’ve tried, but nothing else provides anywhere near the flexibility and freedom that I have with KeyCreator.”

Pacific Design Service is located in Ocean Park, WA and can be contacted via email here.

Adam Halterman is the Brand Manager for Kubotek3D.