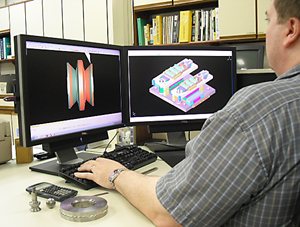 “We are always asked how we can get our designs and tooling done so fast. The answer is KeyCreator.” Kenneth Harris, Manufacturing Engineer, Cardinal Manufacturing

What’s your competitive edge? Your secret weapon that keeps your customers and competitors wondering how you do it?

For Cardinal Manufacturing, the key to success lies in their choice of 3D CAD design software.

Louisville, Kentucky is home to three major roll forming companies and competition is fierce. Speed and precision in the design-to-manufacture process is critical for these firms. Roll formers need to quickly quote jobs, create accurate tooling, and produce quality parts in order to keep winning business.

Kenneth Harris of Cardinal Manufacturing is hesitant to share the way KeyCreator has transformed the way his company does business. He says, “I don’t want to tell my competitors about the huge advantage we have over them and shoot myself in the foot.” (If you’re a roll forming company in Louisville that isn’t Cardinal Manufacturing, this is where you stop reading.)

As a roll forming job shop, Cardinal Manufacturing serves customers in industries such as housing, automotive, and even medical implants. Their customers are located throughout the US; they have even done work for companies in Venezuela and China. According to Harris, they are now seeing more on-shoring business. He can think of a dozen big jobs that started in the US, moved to China and are now coming back because of the quality and lead time they can offer.

“The speed at which we can turn around job quotes, including significantly reduced lead times, leaves our competitors in the dust,” Harris says. “KeyCreator allows Cardinal Manufacturing to be more competitive in both design and machining time.”

Before KeyCreator, Cardinal Manufacturing’s lead time for a production roll formed part was as long as 20 weeks. That’s not unusual in the roll form business. Quoted lead times are often quite lengthy to allow for sufficient engineering time as companies need to prepare customer supplied CAD files for production.

Unfortunately, such long lead times created higher costs and left Cardinal Manufacturing vulnerable to their competition. Harris says that when they started using KeyCreator, the lead time went down to 12 weeks “overnight.” That lead time continued to improve and they now experience an average lead time of 4 weeks.

Using KeyCreator means Cardinal Manufacturing can reuse models and NC programming. Designs can be modified to accommodate a variety of changes that speed the design process, without ever having to start a new design. The time from order to first cut is reduced drastically. Harris says, “We are always asked how we can get our designs and tooling done so fast. The answer is KeyCreator.”

Harris shares an example of this speedy turnaround and tells of receiving an order for tooling to produce a roll formed ring (think of a hose clamp). The ring started out as a single profile and single diameter. Over the years, however, that one tooling order resulted in 13 different profiles. Each of these profiles required up to 25 different diameters.

Harris credits KeyCreator for giving Cardinal Manufacturing the speed and ease to make the necessary modifications on this roll formed ring.

“With KeyCreator Direct modeling, we were able to modify the models and produce the complete new designs for the set of tools in less than four hours,” he recalls. “Before KeyCreator those changes/redesigns would have taken two to three weeks. With anyone else, you’d never get that two-week lead time.”

KeyCreator is used for roughly 75% of Cardinal Manufacturing’s designs. Cardinal does have another 2D parametric-based CAD software they use for a small number of designs, but when designs cannot get done correctly or are taking too long, they transition the design over to KeyCreator.

Harris likes the way KeyCreator seems to adapt to each designer’s way of modeling.

“That’s the fundamental reason we like KeyCreator,” he says. “It gives us many ways to do the same function, unlike other software where you have to follow strict guidelines. If you vary from those rules, your design implodes on itself.”

In addition, Harris believes KeyCreator is faster than their 2D program, helping them get 3D geometry to their shop quicker in order to start CAM programming. Now that their customers are used to fast lead times, accurate designs and production parts, Harris says, “If we didn’t have KeyCreator, it would be as if we were designing with a drafting board and T-square.”

Using KeyCreator as a collaboration tool gives Cardinal Manufacturing yet another win against competitors. Customers might provide paper drawings that don’t convey all the necessary design elements required for production. With KeyCreator, Cardinal Manufacturing can work on designs immediately – even in front of customers - or easily review needed changes with customers via a 3D PDF.

“I’m proud to be able to offer such quick project turnaround for our customers,” Harris says. “I’ve seen us get a job quoted and to the shop floor in as little as four hours. There’s nothing like getting started on a project almost immediately. But, what’s even more impressive is completing an accurate customer quote while our prospective customers are still in our conference room. My boss really likes that!"

Outside of his work as an engineer at Cardinal Manufacturing, Kenneth Harris is also owner of Geometric Technologies, a company that provides engineering and programming services to a wide range of customers, many of whom use KeyCreator.

While Harris’s company focuses on tool design, its other specialty is software customization, such as creating KXL macro programs for KeyCreator. These programs can be used to automate tasks and tedious design chores often faced by designers and engineers.

Geometric Technologies has developed several custom programs that “turn an average designer into an expert designer,” according to Harris. “We can do VB/KXL combo programs, as well as write some C++ programs based on what a customer wants.”

A recent project of Geometric Technologies involved a patent-pending design that uses a CMM machine with KeyCreator integration and control. Custom software allows a CMM to draw directly in KeyCreator – not just data points, but lines, arcs, circles and custom shapes drawn by the CMM locations.

Harris is a long-time user of KeyCreator, and also it’s predecessor CADKEY beginning back in 1985.  He concludes by saying, “I have tried almost all other CAD programs on the market and always come back to KeyCreator. The software has been the key to saving time and earning our customers’ business.”

KeyCreator really is Harris’s secret weapon. But remember, if you’re talking to other roll form companies in Louisville, Kentucky, mum’s the word on the source of Cardinal Manufacturing’s competitive advantage.